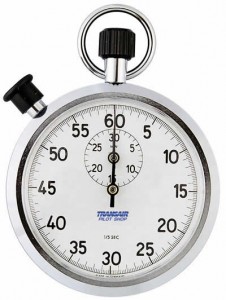 That measuring API documentation is difficult is one of the things I’ve learned from writing developer docs for more than 11 years. Running the study for my dissertation gave me a detailed insight as to some of the reasons for this.

The first challenge to overcome is answering the question, “What do you want to measure?” A question that is followed immediately by, “…and under what conditions?” Valid and essential, but not simple, questions. Stepping back from that question, and a higher-level question comes into view, “What’s the goal?” …of the topic? …of the content set? and then back to the original question, of the measurement?

For my dissertation, I spent considerable effort scoping the experiment down to something manageable, measurable, and meaningful–ending up at the relevance decision. Clearly there is more to the API documentation experience than just deciding if a topic is relevant, but that’s a pivotal moment in the content experience. The relevance decision also seemed to be the most easily identifiable, discrete event that I could identify in the overall API reference topic experience. It’s a pivotal point in the experience, but by no mean the only one.

The processing model I used was based on the TRACE model presented by Rouet (2006). Similar cognitive-processing models were also identified in other API documentation and software development research papers. In this model, the experiment focuses on step 6.

To wrap this up by returning to the original question, that is…what was the question?

In this experiment, other elements of the TRACE model are managed by or excluded from the task.

Last month, I published a summary of my dissertation study and I wanted to summarize some of the thoughts that the study results provoked. My first thought was that my experiment was broken. I had four distinctly different versions of each topic yet saw no significant difference between them in the time participants took to determine the relevance of the topic to the task scenario. Based on all the literature about how people read on the web and the importance of headings and in-page navigation cues in web documents, I expected to see at least some difference. But, no.

The other finding that surprised me was the average length of time that participants spent evaluating the topics. Whether the topic was relevant or not, participants reviewed a topic for an average of about 44 seconds before they decided its relevance. This was interesting for several reasons.

While, these findings are interesting, and bear further investigation, they point out the importance of readers’ contexts and tasks when considering page content and design. In this case, changing one aspect of a document’s design can improve one metric (e.g. information details and decision speed) at the cost of degrading others (credibility and appearance).

The challenges then become:

I’m taking a stab at those in the paper I’ll be presenting at the HCII 2015 conference, next month.

During November and December, 2014, I ran a study to test how varying the design and content of an API reference topic influenced participants’ time to decide if the topic was relevant to a scenario.

The most unexpected result, based on the literature, was how the variations of visual design did not significantly influence the decision time. Another surprise was how long the average decision time was–almost 44 seconds, overall. That’s more than long enough to read the entire topic. Did they scan or read? Unfortunately, I couldn’t tell from my study.

The four variations of API reference topics resulted from two levels of visual design and two levels of the amount of information presented in the topic.

END_OF_DOCUMENT_TOKEN_TO_BE_REPLACED

After being submerged in the depths of my PhD research project since I can’t remember when, I’m finally able to ponder its nuance and complexity. I find that I’m enjoying the interesting texture that I found in something as mundane as API reference documentation, now that I have a chance to explore and appreciate it (because my dissertation has been turned in!!!!). It’s in that frame of mind that I consider the antithesis of that nuance, the “sloganeering” I’ve seen so often in technical writing.

Is technical writing really so easy and simple that it can be reduced to a slogan or a list of 5 (or even 7) steps? I can appreciate the need to condense a topic into something that fits in a tweet, a blog post, or a 50-minute conference talk. But, is that it?

Let’s start with Content minimalism or, in slogan form, Less is more! While my research project showed that less can be read faster (fortunately, or I’d have a lot more explaining to do), it also showed that less is, well, in a word, less, not more. It turns out that even the father of Content Minimalism, John Carroll, agrees. He says in his 1996 article, “Ten Misconceptions about Minimalism,”

In essence, we will argue that a general view of minimalism cannot be reduced to any of these simplifications, that the effectiveness of the minimalist approach hinges on taking a more comprehensive, articulated, and artful approach to the design of information.

In the context of a well considered task and audience analysis, it’s easy for the writer to know what’s important and focus on it–less can be more useful and easier to grok. He says later in that same article,

Minimalist design in documentation, as in architecture or music, requires identifying the core structures and content.

In the absence of audience and task information, less can simply result in less when the content lacks the core structures and content and misses the readers’ needs.   More can also be less, when writers try to cover those aspects by covering everything they can think of (so-called peanut-butter documentation that covers everything to some unsatisfying uniform depth).

For less to be more, it has to be well informed. Its the last part that makes it a little complicated.

For my PhD dissertation, I ran an unmoderated, online study to see how variations in page design and content of an API reference topic would affect how people found the information in the topic.

For the study, I solicited participants from several software development groups on LinkedIn and a few universities around the country. It’s definitely a convenience sample in that it’s not a statistically random sample, but it’s a pretty diverse one. Is it representative of my audience? I’m working on that. My suspicion, in the mean time, is that I’ve no reason to think it’s not, in that the people who read API documentation include a lot of people. For now, it’s representative enough.

A wide variety of people responded to the 750,000 or so software developers and people interested in software development that I contacted in one way or another. From those invitations (all in English, by the way), 436 people responded and 253 actually filled out enough of the survey to be useful. The 253 participants who completed the demographic survey and at least one of the tasks were from 29 different countries and reported speaking a total of 32 different native languages. Slightly less than half of the participants reported speaking English as their native language. After English, the top five non-English native languages in this group were: Hindi, Tamil, Telegu, Kannada, Spanish.

All of this supports the notion that not providing API documentation in any language other than English is not inconveniencing many developers—developers who respond to study invitations in English, at least. An interesting experiment might be to send this same survey to developers in other countries (India, China, Japan, LatAm, for starters) in their native languages to see how the responses vary.

So many studies. So little time.