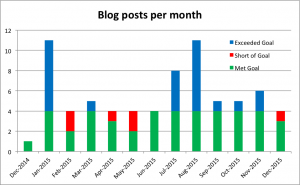 It’s hard to believe: a) it’s 2016 (and still, no flying cars…), and b) it’s been over three weeks since my last post. I don’t have much to say about flying cars (except that it’s probably better that we don’t have them, yet), but it’s a good time to reflect on my first year of blogging.

In my vision statement, I set a few performance goals and the graph shows how I did, last year. Not bad. A few under-performing months, explained (and, perhaps, excused) by the other, higher priority things going on at the time. Finishing my Ph.D. in the first half of the year and, well, I took a break in December.

The table shows the statistical summary of my blogging performance for last year. While I had some ups and downs, I averaged more than 5 posts per month. I managed to keep the posts under 500 words, except for the first one of the year–before I set that word count as a goal.

Not shown in the stats is the time it took to write each post–about an hour each. I know that because most of them were written as I rode the train to or from the office (usually to) and that ride is 55 minutes.

Also not shown in the stats is the “start to finish” ratio, or, what the cutting-room floor looks like. According to WordPress, I started 79 blog posts, last year, and published 66 for a completion ratio of 84%.  I don’t know if that’s good or bad–or if published/started is even the right metric. Looking back at some of those unpublished posts, I think the right way to look at that number is that I published 100% of the posts worth publishing.

I think, for the time being, I’ll stick with the goals I set last year. The 500 word/post goal was a good goal to enforce sticking to the point and keep the work manageable, but it also limits their value and utility. I’ll be pondering that goal to see about how to create more valuable content while not making the posts to onerous to produce (or read).

So, welcome 2016 and all that it will bring and (belated) Happy New Year.